Why will I March Against Child Abuse? It’s really easy to say we love children. It’s really simple to say we don’t want children to get hurt. No one is shocked that good people don’t think those that can’t protect themselves should be protected.


It’s also easy to lump “children” into a picture we can find on Google Images or the masses we see filing out of a school at 3 o’clock. Sadly child abuse isn’t something that just happens to “those children.” The ones who are short, a little dirty, adorable in their own right, but don’t really have a face or a place in our hearts. It’s not just a newspaper story that we shake our head at and say, “oh it’s such a shame,” or, “bless her little heart.” Abuse is real. It happens to real children with real heartbeats, real tears, real fingers and toes, and real hope for the future if we give them one.

I have loved a child who was abused. I have loved him so fully that he changed my heart and mind completely. It is still hard for me to talk about him out loud. The pain threatens to swallow me whole every time I open the lid to the container I keep it in. Jace came to us from the hospital where he lived until he was six months old. My sister was his nurse there, and she and I shared a house together. The state determined he couldn’t live with his mom, so we decided to give him a home and a family. Jace was sick. He was born too soon and had too many problems. They said he would likely die. The first night he came home I held him in my arms begging him to stay alive while my sister called the doctor trying to figure out why he wouldn’t breathe. He couldn’t eat through his mouth; he breathed through an oxygen tube; and was on a dozen medications.

Jace was a fighter though. It makes me so much more ashamed that I failed to keep him safe after he fought so hard. Jace spent over two years with us growing into the happiest, cutest, smartest, most perfect creature that ever lived. He wasn’t the picture you see in the papers of abused children. He was cherished and cared for. He was spoiled and adored. Jace was popular with everyone. He was clever and funny and everyone who met him loved him. He truly was a light.

Evil has never been able to stand the light, and in 2010, evil entered our lives. My sister wanted a normal family. She wanted a dad for Jace. She wanted to be loved. She was naïve and trusting and blind. When she started dating him, I didn’t like it. He seemed crass and trashy and ignorant. I found he had protective orders filed against him in the past. He wasn’t educated, but he wasn’t stupid. He had an answer for everything. A reason, an excuse, a believable story. We think people are good, we think people tell the truth, we think people mean well. He wasn’t good, he didn’t tell the truth, and he didn’t mean well.

On June 13, 2010 he was left alone with Jace while my sister went to work over night at the hospital. We will never know what happened that night. I imagine Jace wouldn’t go to sleep and kept crying and getting up. He beat him, threw him, and shook him so hard that the doctor compared the damage to his brain like a high impact car crash. Jace finally went to sleep that night and never woke up again.

This is why I will March Against Child Abuse. I won’t stand back and ignore what’s happening. If helping a child takes up my time, my energy, and my money – it’s worth it. I will shout from the rooftops, “Children are precious and should not be hurt!” I will pray. I will cry. I will annoy people. I will make a fool of myself if I have to, because children are being killed, beaten, and raped. This is why I will March. Jace deserved better.


For more information about this event visit:


www.facebook.com/MillionMarchAgainstChildAbuseTulsa
Posted by Stacey at 1:32 PM 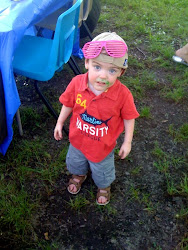